STEV 2010 is an important milestone for young artistic movement in Vrancea, which stage performances in the true sense of the word. Playwrith, directing, costumes, lights, stage play, all competed in the success of the plays and have captured the attention and apreciation of jury and spectators. Trophy of the XXVIII edition in 2010 was adjudicated by National College “Unirea”, and the next places were taken by National College “Al.I.Cuza” and “Edmond Nicolau“. The awarding ceremony was held at the Trade Union House of Culture “Leopoldina Balanuta“ and was filled with emotion for participants. Total value of prizes was 4.500 lei and was supported by VARANA Rotary Club Focsani, the official sponsor of STEV 2010.

The first spot on the podium and the trophy went to “Unirea”`s students which won applause from the judges with the play “Circ in largul marii“, by Sawomir Mrosek. In addition to the first prize (1.500lei), the cast was invited to play this show on the stage of “George Ciprian” in Buzau, in October 2010. Second place was taken by National College “Al.I.Cuza“  with “Badaranii”by Carlo Goldoni, the value of the prize was 1.000 lei. Third place went to Technical College “Edmond Nicolau“ with the play “Mastile iubirii“ and won 800 lei.

The most talented students received individual awards for their performances (200 lei). All nine participating schools received diploma and applause from the audience. VARANA Rotary Club, who fully supported the event, joined the participants this year, too. Outstanding developments of young students and public appreciation consolidated the approach that Rotary Club imposed itself, to support every year STEV. 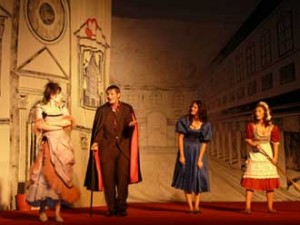