The Rotary Club VARANA Focșani has completed the project entitled “Mathematical Manuals for the Visually Impaired Students”, an initiative started on the occasion of the Charity Ball organized by the Club in March 2017, which, together with the “Book Traveling” Foundation, proposed translating and printing into the system. Braille of mathematics textbooks in grades 0-VI for blind students.

On Wednesday, 04.04.2018, at the Children’s Section of the County Library “Duiliu Zamfirescu” from Focșani, the Rotary Club VARANA and the Foundation “Book Travel” organized the closing event of the project, a very important one for the blind because for the last 30 years it has not been have also published technical manuals in Braille.
Throughout this project, mathematics textbooks for grades II-V were accessed for blind students, a complex process that requires methods of accessing information: the pictures and the diagrams must be described in words and transposed in Braille, and the formulas must be coded in the mathematical code, which means that a math textbook printed in Braille is 20 times thicker than an ordinary one.

For the upper classes another method of accessibility was used, thus the manual for the 5th class and later the one for the VI class was converted into an electronic format. As part of this project, supported by the Rotary Club VARANA Focșani, the first chess manual was developed in Braille, intended for students in the first class, a game that stimulates logical thinking and helps them learn mathematics.

All textbooks made within the project were distributed free of charge to schools for the visually impaired in the cities of Arad, Timișoara, Cluj, Târgu Frumos, Buzău and Bucharest, an initiative that we hope to induce to the general public the idea of ​​accessibility of textbooks for blind children. 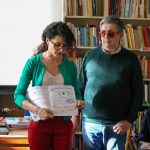